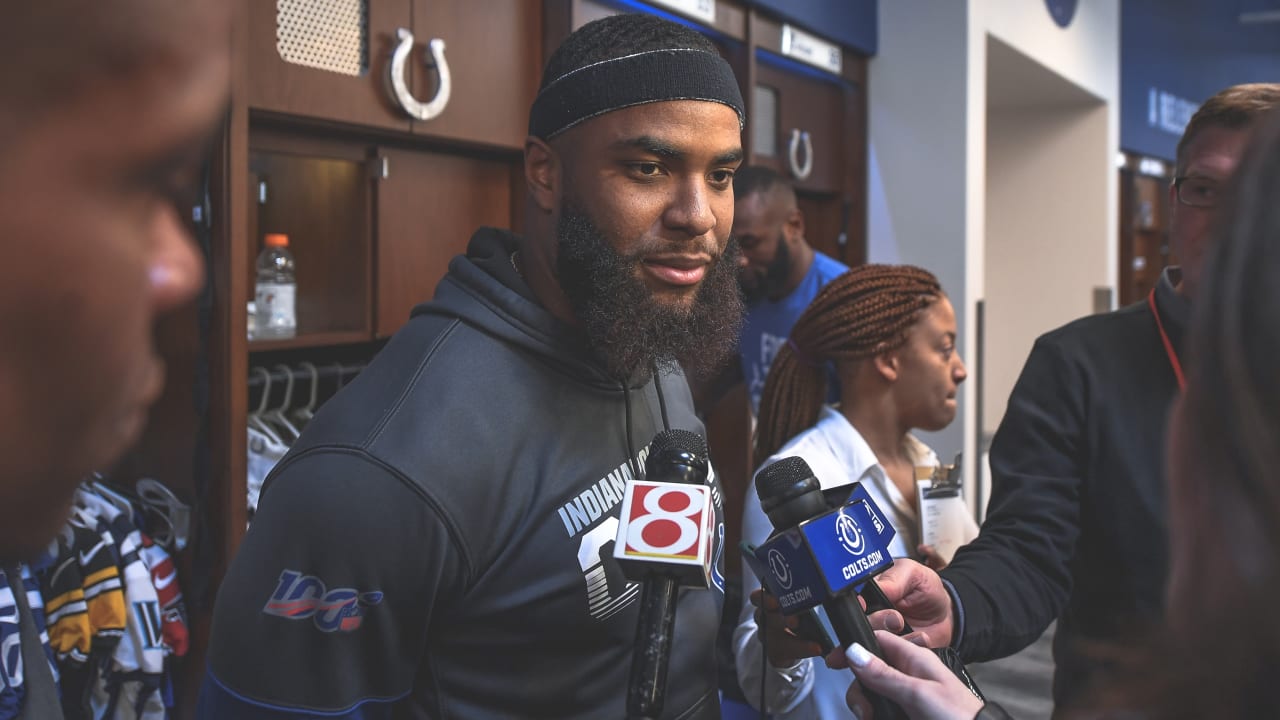 » Like T.Y. Hilton, Ryan Kelly and others, Walker is entering a contract year in 2020, and while he’d like to remain with the Colts, he’s going to let the process play itself out: Walker entered the league with the Colts in 2017, who selected him in the fifth round of that year’s NFL Draft. After dealing with injuries throughout his rookie season, Walker has been a mainstay in the Colts’ defense the last two seasons, starting 31 of a possible 32 regular season games over that span, mostly at the MIKE linebacker position.

Walker, in all, has 251 total tackles (17 for a loss) with 3.5 sacks, two interceptions, six passes defensed, one forced fumble and one fumble recovery in his three seasons with the Colts, and today said he’d love to keep that going in Indy past the 2020 season, but knows ultimately it’s out of his control.

“I’m excited I still have the opportunity to go out there and play the game that I love,” Walker said. “That’s not up to me. I’d love to be in Indy forever, but that is not up to me. I’ll go out there, execute and do my job and hopefully it works out that way. We will go from there, but right now my focus is on playing this season and getting in the best physical shape – mentally and physically in every way that I can to help my teammates do the same thing so we can go out and have a successful season this year.”

Indy has showed signs of being a legit defense through stretches the past couple seasons, but now Walker believes between the returners and the newcomers that it’s time to become one of the best overall units in the NFL.

“I think we added pieces that took us from what we feel had a chance to be a good/great defense to an elite defense,” Walker said. “you add Xavier Rhodes, you add DeForest Buckner, Sheldon Day. You already had some guys at pretty elite positions – Darius Leonard, Bobby Okereke, Justin Houston, Kenny Moore II, you already had those guys (and) Malik Hooker. You add the pieces that we added this offseason and now we have to go out there and put it all together on the field together.

“On paper it looks great, like a beautiful drawing right now,” Walker continued. “We’ll piece it all together like a puzzle and hopefully we’ll get to clicking as soon as we get into the facility working out together and everything like that and Week 1 we can go ahead and put it on display.”

As for Rhodes specifically, Walker knew of the cornerback growing up in the Miami area, and now the two have been training together in South Florida.

“Just watching him as I was growing up, he was one of the top recruits in the state of Florida when I was a younger player coming up. Seeing how hard he worked, playing hard at Florida State, playing at Miami Norland Senior High School down here, which is known for having great talent – standing out there, going to Florida State and then going to Minnesota,” Walker said of Rhodes. “This is my first time actually training with him so seeing how hard he works and the energy that he brings every day in the workouts, I can just imagine the energy he is going to bring to the locker room and on the defense. I am excited, I am excited to have him here.”

» Walker will be switching uniform numbers this year: Walker had donned No. 50 his first three years with the Colts, but this year he’ll be sporting the No. 54.

The move was actually made to help out a couple defensive teammates.

Defensive end Justin Houston, who had worn No. 50 his entire career with the Kansas City Chiefs before signing with the Colts as a free agent last offseason, wore No. 99 in Indy in 2019, but was hoping to get back into No. 50 in 2020.

Then, when the team acquired Buckner from the San Francisco 49ers in March, that opened the door for Buckner to get his old No. 99 from Houston, Houston get his old No. 50 from Walker, and Walker to move to 54.

“It’s cool. I loved it,” Walker said of all the uniform number changes. “I love the guys being able to feel comfortable with their numbers and everything like that. For me, I am good. I like being No. 54 now.”

Was Walker possibly enticed by an offer from Houston and/or Buckner to make the move? The world will never know.

“We’ll keep that in-house between us three,” Walker said with a smile.