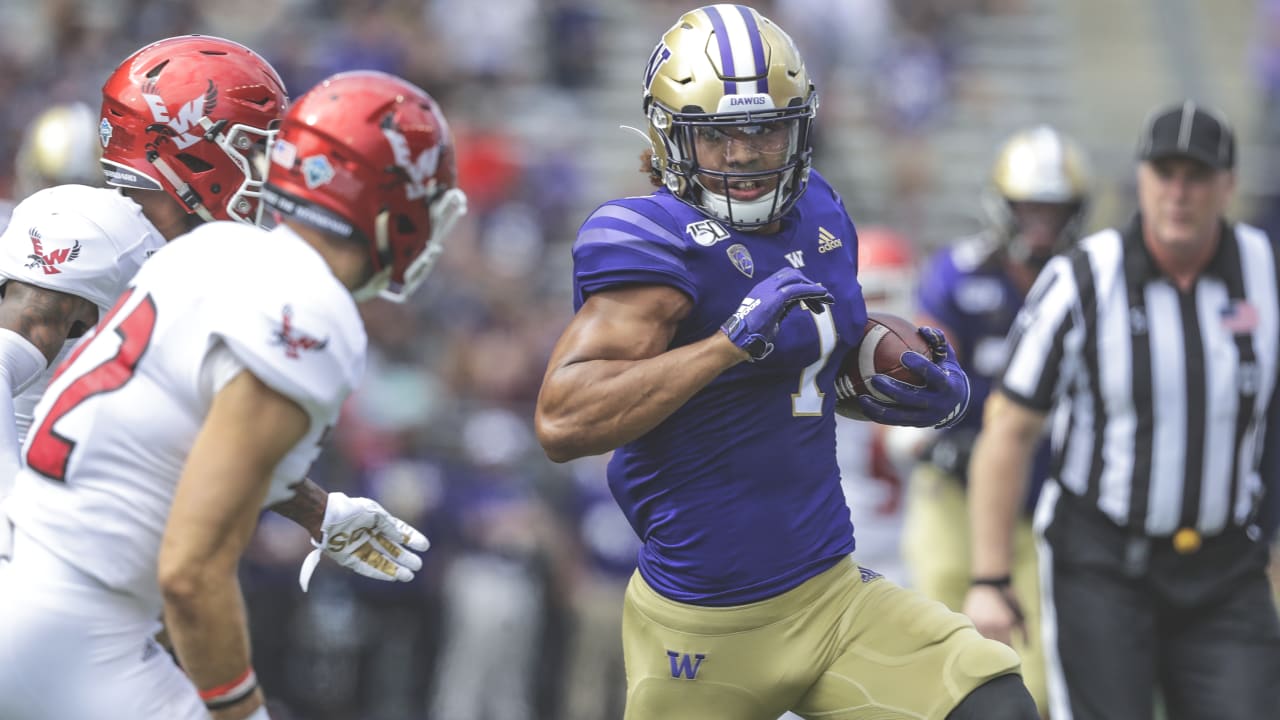 INDIANAPOLIS — The days in the NFL in which tight ends just help out as blockers are long gone.

Not only should every team have a tight end who is a pass-catching threat, but many are also on the lookout for one who can stretch the field and create mismatches.

One of the best tight ends in the 2020 NFL Draft class who can win at all levels of the field — and the first tight end on our list of prospect profiles — is Hunter Bryant of the Washington Huskies.

“Really, I feel I could play at this level — It’s been my goal since I was 5, to be honest,” Bryant told reporters at the Scouting Combine in February. “I’ve been working for this my whole life, and after the season I had last year I felt like it was time for me to pursue my dream.”

Bryant started five of the nine games in which he appeared as a true freshman in 2017. He missed the final four games of the season with a reported torn ACL and MCL in his left knee, but was named a co-winner of Washington’s Outstanding Freshman award at the season’s end.

In his return from his knee injury, Bryant then tore the meniscus in his knee, which also required surgery and forced him to miss the first nine games of his sophomore season, appearing in just five contests.

Bryant was able to make a full recovery and come back in a big way as a junior in 2019. He started 11-of-12 games, catching 52 passes for 825 yards (15.9 avg.) and three touchdowns. According to Pro Football Focus, Bryant finished fourth in the country among tight ends in receiving grade (7.9) and receiving yards, fifth in receptions, and eighth in pass targets (80).

He earned Washington’s Most Outstanding Offensive Player award at the postseason awards banquet on top of being named First-Team All-American by The Athletic, First-Team All-Pac 12 and one of three John Mackey Award finalists, which honors the best tight end in the country.

For his career, Bryant started 16-of-26 games and caught 85 passes for 1,394 yards (16.4 avg.) and five touchdowns, finishing with the second-most receiving yards and the fourth-most receptions by a tight end in program history.

As an NFL player, Bryant should eventually transition seamlessly as a pass-catching threat, although tight end seems to be one of the positions that takes players the longest at which to acclimate at the professional level.

He is considered slightly undersized at 6’2-¼” and 248 pounds, but for what it’s worth as a pass-catcher, his hand size is well above average (10-⅜”). Bryant has an athletic frame for a tight end, and looks just as much like a big, muscle-bound wide receiver.

He is versatile and can line up all over the formation, as an in-line player, in the slot and lined up out wide. Bryant runs all of the typical tight end routes from those formations — short, intermediate and downfield — and he’s even got the movement abilities to utilize double-move routes.

Bryant has quick feet and makes fluid cuts in and out of his breaks as a route runner. He can beat man coverage, and gets separation with his blend of speed and quickness.

He ran a 4.74-second 40-yard dash at the Combine. While that is above average for the position, it’s likely lower than what he shows on tape, as his speed truly sets him apart.

Bryant tracks the ball well while it’s in the air, and shows good body control to adjust to it to come down with the reception.

He has reliable hands and even makes tough catches in traffic, including bang-bang plays where he gets popped after the ball arrives. Bryant is, however, prone to the occasional concentration drop where he’s focusing more on what is going to happen after the catch before actually securing it.

What he lacks in prototypical, big-body tight end size, Bryant makes up for in athleticism.

He is very good after the catch, likely due to his background as a running back, and it’s arguably the strength of his game. He not only has the necessary speed to leave defenders behind him, but he also has good vision to take the right path. He is tough and very difficult to bring down with the ball in his hands. According to PFF, he was second among all tight ends in the country last year in yards after the catch (399), and fifth in missed tackles forced (12).

“Actually, I played running back growing up. I didn’t play tight end until college,” Bryant said. “So growing up, I loved Walter Payton and Eric Dickerson and their running style and how smooth they were because that’s how I played and I kind of emulated that style.”

“I think so. I have a lot of fun with it,” Bryant said of how his experience as a running back helps him after the catch. “I love having the ball in my hands, trying to make plays and be explosive. When I’m in the open field, I feel like I’m at running back again and I just popped one loose and I’ve just gotta make a couple people miss and go score.”

Bryant was even considered enough of a playmaker that Washington gave him a couple carries last season.

He is very willing and puts effort into blocking, but it’s also his biggest area for improvement. While he’s not overpowering and needs to begin locking on more in the run game, he is still sometimes effective at pushing defenders out of the way. However, he isn’t very grounded as a blocker and can be pushed himself. His technique could use some work, as he does not square up defenders consistently enough.

“I definitely still have a lot of room to grow. I have a lot of things I could work on in every aspect of my game. That’s what makes football an amazing sport — you’ll never be perfect. There will always be something you can work on and get better in and better yourself in. So that’s definitely something I’m excited to do as I keep moving forward in my career and work on myself,” Bryant said of what he’s working to improve on. “Definitely in-line run blocking. That’s something I self-diagnose, and when I talk to them, they ask me what I can work on and I say that, and they agree with me. So that’s like the biggest thing moving forward is working on my strength and my power and my technique, and I think I’m doing a great job of it so far.”

Bryant’s biggest area for improvement may be in-line blocking, but he’s embracing it.

“Last season, I definitely found a love for it,” he said. “So moving forward, I definitely want to do it a lot more and really just keep getting better at it so I can be a three-down player in the NFL and never have to come off the field.”

Brian Peters donating half of his XFL salary to…

What are the Colts’ roster needs now that the free…