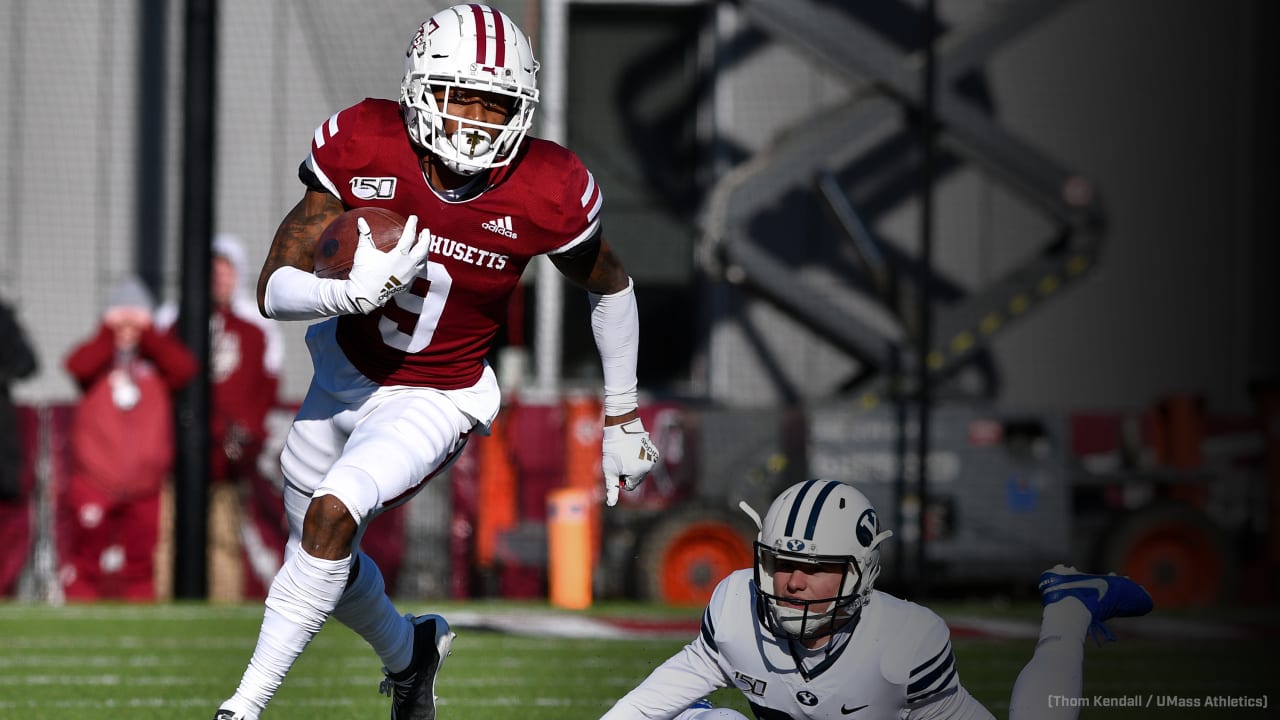 That was Rodgers’ reaction in mid-March when he had learned via text message that UMass had canceled its pro day.

On March 11, the World Health Organization declared a pandemic due to the sharp rise in confirmed COVID-19-related cases and deaths across the globe. Two days later, the NFL distributed a memo to all 32 teams, prohibiting any sort of in-person pre-draft visits. In short: teams could no longer host prospects at their facilities, and they could no longer send their scouts and coaches on the road to further evaluate prospects at their respective pro days.

For some of the top-ranked NFL hopefuls, this wasn’t a huge deal. They had already participated in key postseason all-star events such as the Senior Bowl (Jan. 21-25), as well as the NFL Scouting Combine, which was held Feb. 23-March 2 in Indianapolis; not much from this point on was going to affect their draft stock.

But for guys like Rodgers, who at the time estimated he had varying interest from about nine or 10 NFL teams (including the Colts; more on that later), this development was discouraging, to say the least. Rodgers, who wasn’t invited to participate in the Combine, was banking on his pro day numbers catapulting him from an undrafted free agent candidate on most teams’ draft boards to possible late-round pick status.

But Rodgers said phone calls from his agent, Bryan Gavin, founder of The Gavin Agency, as well as Eric Young, Gavin’s Director of Operations, immediately put his mind at ease that day.

Truth be told, at that time, Rodgers’ representatives, while confident, were quietly scrambling, working the phones and trying to figure out the best way to overcome this major obstacle.

“Once the COVID-19 had hit and all of the pro days were eventually shut down and closed, now we’re going into waters that a lot of agents, even ourselves, aren’t familiar with,” Young said. “So now you have to rely on relationships. You have to rely on a business savvy, experience as an agency, as an agent, to really know what you’re doing and how to maneuver through that.”

The idea of executing a “virtual pro day” certainly wasn’t an original one, as dozens of other prospects facing the same adversity were already in the process of sending recorded workouts to teams across the league.

But Gavin and Young wanted their players’ workouts to stand out. They asked team scouts what exactly they wanted to see and how exactly to go about showing it. But perhaps the key piece to all of this was the decision to bring in Richard Shelton, a former NFL cornerback who had almost two decades of experience as a former college scout with the Tennessee Titans.

“We knew that, hey, the scouts and the teams weren’t going to take times from us just doing our own pro day with us or a trainer doing the times. There’s no validity with those times,” Young said. “We had to go in and hire our own personal, former scout.”

At that point, there were still some logistics to be worked out. Rodgers’ pro day was tentatively scheduled for an upcoming weekend, and while those participating had an indoor facility available to use for a majority of the events (measurements, bench press, vertical jump and broad jump) at D1 Training in Tampa, the group still needed to secure a full-sized football field to conduct the timed running events, such as the shuttles and the 40-yard dash, as well as position drills.

Finding that field was going to prove to be easier said than done, however, as most cities and schools had already started closing down their facilities as a precaution and to adhere to social distancing measures.

On top of everything else, Young said Shelton wanted to move the date of the event up a few days to that Tuesday, catching Rodgers completely off-guard.

“I know I got the message at 6 p.m. (Monday),” Rodgers said. “Eric doesn’t text; he sends voice messages. He’s like, ‘We’re going to do a mock pro day tomorrow. So stretch up. Stay hydrated.’ I’m like, ‘Wait. What? We just squatted yesterday at the facility. Where is this coming from?’ So we had to literally lock in for about 12 straight hours as we got back up and ready.”

The Gavin Agency guys, meanwhile, were in total “wing-it” mode by then.

“It was just out of the ordinary, man. A lot of the parks were closed, to be honest, and we didn’t know — we didn’t tell Isaiah or the other guys — we didn’t know if we were going to have a field,” Young said. “We knew we had a facility to do the bench press, the broad jumps and do all the indoor stuff, the measurements. But we were not 100-percent sure that we were going to have a field to do the 40s and the agility stuff.

“So we didn’t know until the last hour, to be honest,” Young continued. “We didn’t know what to expect right up until the last minute. … We scouted some parks out and some fields. Everything was closed. But we ended up finding one and having some of the people jump the gates, and some people walked around.”

But the crown jewel of all NFL workouts is the 40-yard dash. Rodgers said when he first started his pre-draft training process he was already running in the low-4.3s, but took advantage of his training at the D1 Academy to knock off those extremely valuable few 1/100ths of a second to eventually clock in during his pro day at 4.28 on his second attempt after running a 4.31 on his first try.

Shortly thereafter, before the prospects could start running position drills to close out the day, they were asked to leave the field. But for Rodgers, a weight had already been lifted off his shoulders.

“I think once it happened, it basically cleansed everyone’s mind like, ‘Boom!’ All that nervousness is over, figuring out pro days and stuff like that,” he said. “I have to say, it really took a load off everyone’s minds after that. It just basically made you lock in even more.”