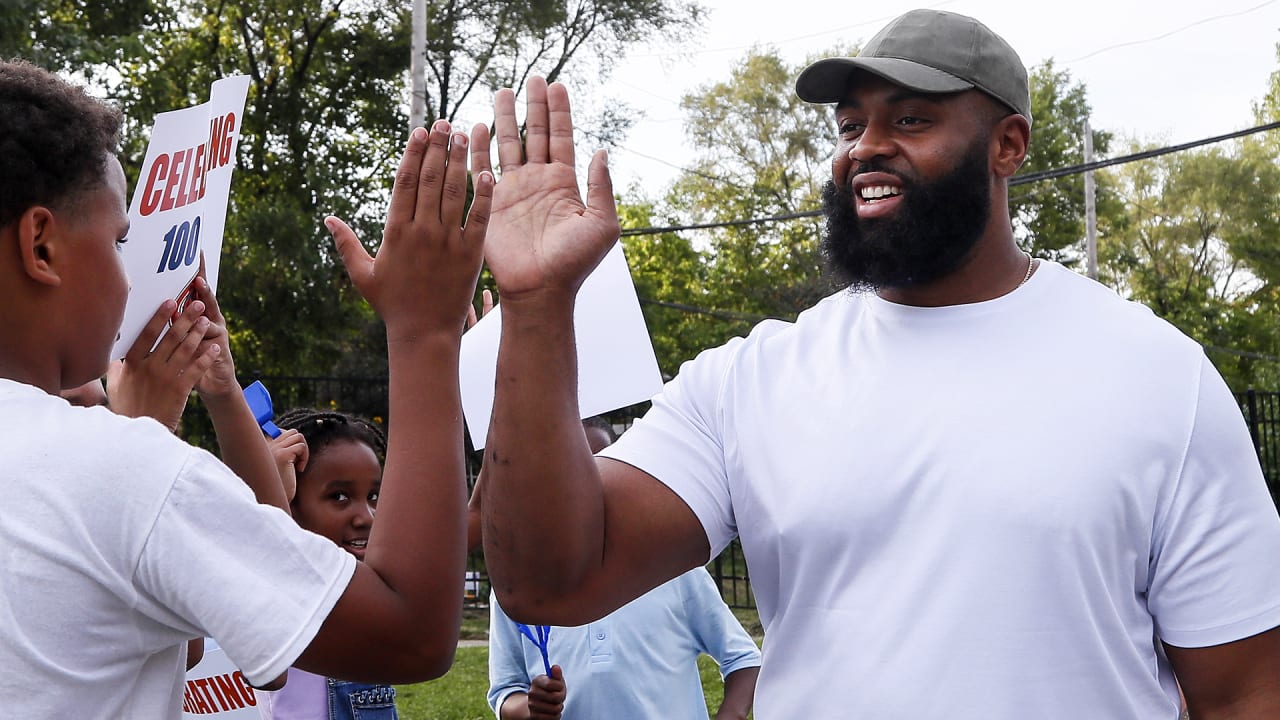 Bears veteran Akiem Hicks made the trek down to Chicago’s South Side on Tuesday afternoon to spread a little bit of characteristic optimism.

The Pro Bowl defensive tackle visited the SOS Illinois Chicago Village in the Auburn Gresham neighborhood. He came bearing gifts–new backpacks for the children who live in the village–and tookpart in an event called “Tailgate Tuesday,” complete with outdoor games, a dance contest and food right off the grill.

SOS Illinois is part of a worldwide organization that builds communities around full-time foster families. The center in Auburn Grisham is one of four in the state. Hicks’ teammate Riley Ridley, along with his older brother, Falcons receiver Calvin Ridley, spent some of their childhood in an SOS community in Florida.

SOS Illinois CEO Tim McCormick said that visits from players like Hicks had been a much-needed morale boost for community residents in the past. Since the South Side facility was built in 2006, the organization has found an ally in the Chicago Bears. McCormick fondly remembers visits from former defensive tackle Anthony “Spice” Adams.

“Kids in foster care really don’t have a voice,” said McCormick. “Often, in the education system, the healthcare system, even in communities, kids don’t know some of the things that have been going on, and they feel invisible. When someone like Akiem Hicks of the Chicago Bears comes here, these kids realize, ‘Wow, we really are something, and people do care.’”

Hicks came to the village with his mother, Desiree, calling attention to her during his remarks and citing her example as one of the reasons that he feels the need to give back.

“It’s just how I was raised,” said Hicks. “I think my parents instilled in me a sense of taking care of my fellow men. To make sure if you’ve got something on your plate and your brother or your family member or any you might see could use a light, you take care of each other. That’s how I feel. I really didn’t have a choice.”

As McCormick introduced Hicks, he lightheartedly read the Kabalarian Philosophy description of the name Akiem. The definition included “responsible and generous,” “good-natured and likable,” and having optimism that could inspire others.

Hicks told reporters that he likes to focus on charities that will help children.

“That optimism that (McCormick) was talking about earlier, it’s so beneficial,” said Hicks, “not only on the football field to my teammates but when I give it to people I meet in the streets or when I go to a school or when I make a visit such as this. I love to see the light in kids’ eyes. To see their joy and see myself impart whatever little bit of wisdom that I can add to their lives.”

Although McCormick described Tailgate Tuesday as a one-time event, Hicks ended his remarks by saying he looked forward to returning to the village in the future.